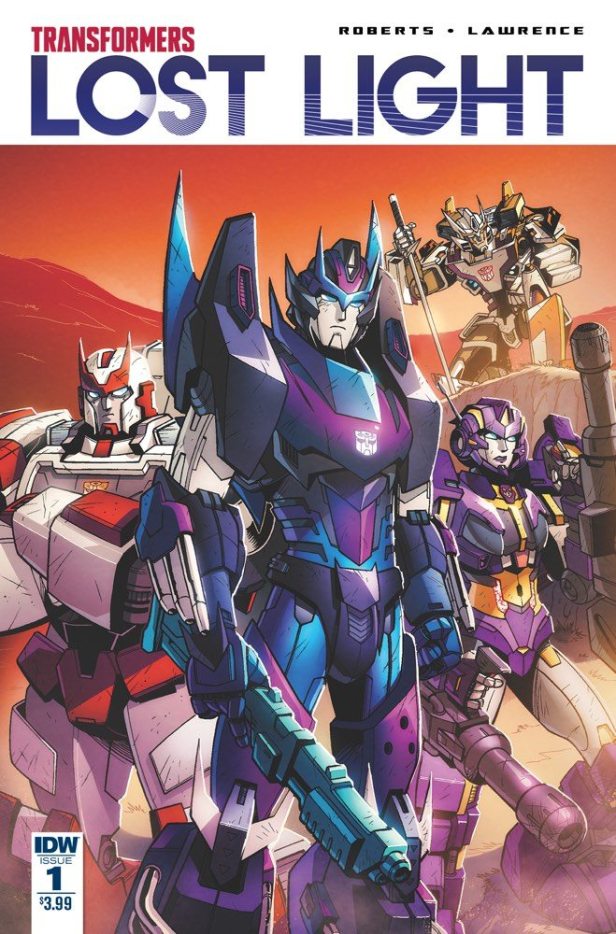 Transformers Lost Light is IDW’s reboot of the critically acclaimed Transformers More than Meets the Eye (MTMTE) relaunched with a brand new number one off the back of the publisher’s recent REVOLUTION event.

Lost Light stands alone from the “shared universe” which Hasbro and IDW have been working to create over the last few months with MTMTE Mastermind James Roberts returning with his trademark blend of action, humour and social commentary.

Lost Light #1 effectively represents the beginning of the Third Season of Robert’s ongoing story arc but don’t let that scare you away.  There are plenty of familiar characters that you’ll recognise if all you know about Transformers is Optimus GOOD Megatron BAD.

Hot Rod, Ratchet, Ultra Magnus and Megatron are all familiar sign posts in the story as Hot Rod leads a ragtag bunch on a quest to bring peace and prosperity to post War Cybertron. His mission, locate the legendary Knights of Cybertron, long lost guardians of the Golden Age before the 4 million year war between the Autobots and Deceptions ravaged the planet, its culture and civilization.

Roberts carefully and cheekily introduces 2 new POV characters in the way of Anode and Lug to help you find your feet in the story and there’s also a thorough recap of the key beats from MTMTE as a post script to the first issue to help answer any lingering questions.

Roberts is joined by fellow Brit Jack Lawrence who handles art chores.  Lawrence has been a solid hand on many IDW books over the last few years with clean line work and animated facial expressions breath life, energy and humour into Roberts script. Special mention should also go to colourists Joana Lafuente and John- Paul Bove for the vibrant and layered colour palette.

Overall Transformers Lost Light #1 is a strong first issue combining action, humour, space fantasy and character drama as only Roberts knows how. The final page twists sets the stage for the next story arc while simultaneously adding layers to the foundation previously established in More than Meets the Eye.

Roberts is a creator who has consistently quietly delivered one of the best ongoing comic series for the last 6 or so years. If you’ve read MTMTE you’ve probably already picked this up.  If you didn’t Lost Light Number is a great jumping on point, if you want to find out what all the fuss is about.

Transformers Lost Light is available from all good comic book stores (and probably even a few bad ones) or you can grab it online at Comixology.  If you liked what you’ve read be sure to check out our review of Issue 2 as things go from bad to worse for Rodimus and the gang.