An evocative and haunting trip through the landscape of the Wild West on the trail of ‘Vile’ Clem Styles.

Set in the glory days of the Wild West, Vile is the story of an evil man called Clem Styles who forcibly steals a young Native America woman called Hard Pants to be his woman shortly after he commits a foul deed to her peaceful tribe.

After we are introduced to the villainous Styles in an opening scene which is both beautiful and heartbreaking, the comic takes a well needed breath to introduce Hard Pants in a sequence of events that manages to succinctly explain her past, her character and her motivations.

This is the point where Vile really begins to shine. Hard Pants is a really fantastic character and the art seems to step up a gear as native mythology and the real world begin to intertwine.

By the end of the second interlude I was thoroughly intrigued by by the story and was along for the ride completely. 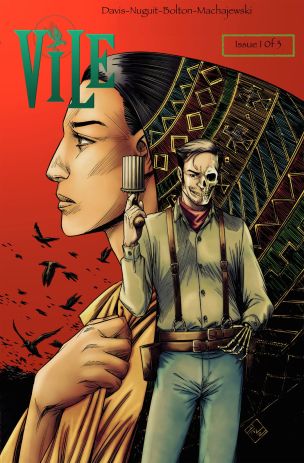 Towards the end of the comic we meet a motley duo of bounty hunters who are pursuing Vile Clem Style for their own individual reasons. These scenes are nightmarish and remind me a bit of horror tales told around a campfire. These vignettes serve to underline the fact that Styles is an absolute scumbag. There is an interesting moment involving Style’s actions in Africa which I won’t spoil here that has me wondering where the creative team are going to take the character in the future.

When I read a comic like this I often think, bring on the TV series already! Vile is no exception. I could happily devour a stack of these comics because it has that quality of story where you are dying to see what happens next!