Will clothes make the man?  Valiant Entertainment’s Flagship Character Returns with a new direction in his latest series.

For 25 Years X-O Manowar has been Valiant’s flagship character.  His debut in February 1992, created by Valiant founder Jim Shooter and legendary artist Bob Layton, ushered in the 90s Valiant phenomenon.  When Acclaim rebooted Valiant Comics in 1996 X-O Manowar led the charge.  This repeated itself in 2012 when Robert Vendetti relaunched the Valiant line.

And now here we are in 2017 with the launch issues of X-O Manowar Volume 4 celebrating the characters silver jubilee with the launch of a new series by Valiant stalwart Matt Kindt and newcomer Thomas Giorello.

So let’s recap in case this is your first encounter with the man known as Aric of Darcia.

The elevator pitch shorthand for Aric / Manowar is that he’s both Iron Man and Captain America at the same time.

He’s a time displaced Visigoth Warlord from the 5th Century CE who wears an exoskeleton of near indestructible alien armour.

Aric was harvested from Earth by the vile and villainous aliens the Vine who used him as a slave and a solider.

Aric led an uprising against his captors, stealing the sentient battle suit called Shanhara, in the process fighting his way all back to Earth, but it was not the Earth he had left behind.

Aric’s struggles to find a place for himself and a home for his people in a world beyond his wildest dreams are chronicled in the 50 issues of Robert Vendetti’s X-O Manowar.  You can read the first year of that series on Comixology Unlimited which I highly recommend you do because it’s a great Superhero read from the first issue to the last.

That series wrapped up about 6 months ago as Vendetti wrapped up his run on the series, packed up his toys and put them in a box. 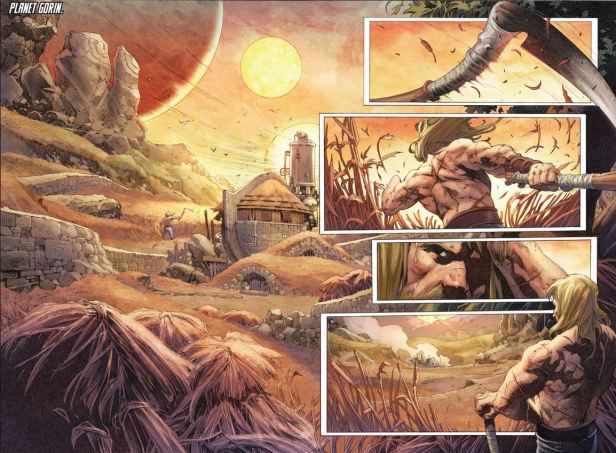 Kindt and Giorello pick up the story an indeterminate amount of time later as we see Aric trying to leave out a peaceful agrarian life on the planet of Gorin. He has separated himself from the Manowar armour like the old gunfighter burying his shooters in the cornfield in the hope of atonement or forgiveness for a life of bloodshed and violence.

The set up of the first part of the issues immediately evokes comparisons to the genre trappings of classic Pulp and Western Fiction.

The most obvious comparison is to Edgar Rice Burroughs Space Barbarian, John Carter Warlord of Mars as well as the strange Sci Fi of Michael Moorcock’s Eternal Champion, in particular the Erekose incarnation.

Western movies tropes from cinema classics from Shane to Unforgiven and from stories like Old Man Logan and the current blockbuster that it’s loosely based on.

Aric is the retired gunfighter looking for put his past behind him.

The violent man with the dark past who wants to wash the blood off his hands and put his troubled history behind him.

But of course fate and circumstances intervene.

In this instance this takes the form of the armies of the Azure nation marching through Aric’s community press ganging farmers, peasants and serfs into the service of their army.

It doesn’t take long for Aric’s old habit and his blood lust to return.

Can he keep his promise to his loved ones to return home to them safe and sound?

How long can maintain his resolve to put his past behind him?

How long will it take before he finds himself confronted by the choice that he didn’t want to have to make.

This is an amazingly strong first issue with writer and artist complimenting each other and working in unison to deliver a great blend of action and personal drama.

Kindt is already well versed in the Aric and the entire Valiant line having been one of the key creators on books like Rai, Ninjak and UNITY.

Giorello brings his experience from years of drawing Conan at Dark Horse, perfectly demonstrating an ability to capture both Aric’s internal conflict and the visceral violence on the second half of the story.

It looks like Giorello is going for a low ink / no ink style which compliments the broad sweeping pastoral landscapes of Gorin and hellish conflict with Aric finds himself drawn into.

I cannot recommend this highly enough.

If you’re looking to take a first step into the Valiant Universe READ THIS BOOK!

If you’re a long time fan of Valiant or X-O Manowar READ THIS BOOK!

If you’re a fan of great Science Fiction action READ THIS BOOK!