Small Scale Studio’s ‘Odie’ is a one-shot comic about a small dog trying to find his way home. Their kickstarter campaign: https://www.kickstarter.com/projects/1390200311/odie-a-small-dog-on-a-big-journey-home is more than halfway to funded and set to end on April 27th. Guest Contributor Mike Schneider from ThunderClap for Comics recently had the opportunity to sit down and chat with writer Aaron Sullivan.

Mike Schneider: The story is described as a lost corgi finding his way back to his family. How’d he end up lost?

Aaron: Odie is an old dog, and it’s difficult for him to focus sometimes. He simply wandered off, became distracted by scents and sounds, and followed them until he no longer knew where he was or how he got there. However, while it sets the stage for this entire issue, the act of him becoming lost is only ever mentioned in passing. The important part is that Odie is lost.

Mike: Why a Corgi?

Aaron: In order for the story to work, the world had to be much larger than Odie himself. He had to be a small dog, faced with insurmountable challenges and monstrous enemies. The tricky part is, that I’m just not a very big fan of most small dog breeds. I grew up with a Pyrenees. I have a Great Dane now. I’m a big dog type person.

Corgis, though. I had always liked Corgis. Ever since I watched Cowboy Bebop on Adult Swim’s late night anime block as a kid, I thought that they were cool. As an added bonus, Corgis have a relatively normal shaped head when compared to large dogs. This matters because Odie carries a serious, almost regal air about him.

I don’t want to insult anyone’s favorite pup, but I feel like it would have been somewhat more difficult for Elli to get those same serious expressions out of a Chihuahua.

Mike: You compare this comic to Homer’s Odyssey rather than say The Incredible Journey/ Homeward Bound. What makes this comic more like the Odyssey than the numerous stories of lost animals finding their way home? Are there mythical elements involved? Are there other pets chewing his bones, encroaching on his family, and trying to sleep at the foot of ‘his’ bed?

Aaron: I’m not going to claim that Odie is dissimilar to movies in that vein, but this comic specifically was made with allusion to the Odyssey. It isn’t through any magical elements, but Odie does face his own cyclops. He is swept away in a sudden storm. He is tempted to abandon his quest. It doesn’t tell the same story. It doesn’t have the same themes or aesthetics, but Odie makes references that anyone familiar with the Odyssey will notice.

If Odie proves successful, we’d love to homage other classic literary stories in the future! There are near-limitless possibilities and the challenge of wrapping some of those fantasies to our own framework is exciting.

Mike: Was the story originally scripted as 22 story pages or did you edit it down? If edited, what was the hardest cut you had to make?

Aaron: The story actually began as a 16 page script, and an anthology submission! After being rejected for being a bit too long, I realized I could easily expand it to a normal, single-issue length by relaxing scenes that had been condensed for the sake of the anthology’s requirements.

Mike: There’s no text on your sample pages. Is the whole comic copy-less?

Aaron: No, the comic definitely has dialogue. In fact, most of it is narrated in an overly-grandiose manner by Odie himself. The reason that the sample pages are not yet lettered is that our primary artist had a rather unfortunate computer meltdown just prior to being able to add the lettering. This problem should be fixed by the weekend (once the replacement comes in), but she just hasn’t had the capability for the last week or so. Once she’s back online, we’ll be adding that to the sample pages in the Kickstarter.

Mike: If your Kickstarter is successfully funded, what’s your estimated timeline for completing the issue?

Aaron: If funded, our stated delivery date of the completed digital comic is August, with physical copies coming in around September. I think that we will easily meet this timeline, if we don’t finish sooner. However, I wanted to be sure to leave in some cushion just in case an emergency arose.

Mike: Is there a plan-b in case you fail to reach your funding goal? What does that timeline look like?

Aaron: Of course! We have no intention of giving up on this project. If Odie fails to fund, we will soldier on with its creation, albeit a bit more slowly. We’ll collect ourselves, evaluate where we went wrong, and try again when we’re ready.

Mike: Your trade dress says the comic is being released by ‘Small Scale Studios’. Is that your label and is this its first release?

Aaron: Yes and yes. My brother and myself have been referring to the office in my house where we do our writing as “Small Scale Studios” for some time, as a double entendre referencing our love for Godzilla and dinosaurs respectively. This is definitely the first comic that I have made with this label, but hopefully, it will be far from the last.

Mike: What are your plans for distribution beyond fulfilling campaign rewards?

Aaron: I intend to distribute digitally through Comixology. Physically, I have talked to several local shops willing to carry the title, and hope to distribute online through indie-friendly dealers such as Comichaus. Aside from that, I’d be ecstatic to table a few conventions and sell copies in person. 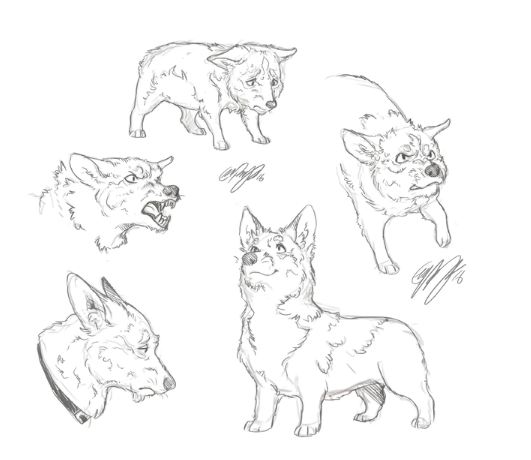 Mike: If someone looking at your campaign is on the fence about pledging, what would you say to try and sway them?

Aaron: Myself, Elli Puukangas, and Karoliina Hankonen are all very passionate about this project. If you read Odie, I think that you will see that passion coming through in the quality of the work. And if you support Odie, then you’re a part of that magic as well.
The ‘Odie’ kickstarter campaign ends on April 27th. Lend your support and preorder your copy over at:
https://www.kickstarter.com/projects/1390200311/odie-a-small-dog-on-a-big-journey-home.

To find out more about Thunderclap For Comics and to see how they help get Indie Comic Projects funded see our article here.