It’s 2017 and it seems like the cyberpunk future envisioned in the 80s and 90s by the likes of Katsushiro Otomo, William Gibson, the Wachowskis or Neal Stephenson is finally here.

For as little as $400 you can enhance your body with an implant to make sure you don’t get lost or one that will help you get into your home or office. For many of us our virtual and digital lives are just as important as our flesh and blood ones.

Metal Made Flesh, a collaboration between British creators artist Simeon Aston and writer Jeremy Biggs, is part of the contemporary wave of Cyberpunk creators.

We talked to the two creators, fresh from the successful Kickstarter funding of Metal Made Flesh 3: Vengeance, about their unique Cyberpunk vision of the distant world of Tuaoni.

AC: Can you start by giving us an overview of Metal Made Flesh; its world, its characters and their stories?

Jeremy: Humanity has been chased to the brink of extinction. After losing a war to an alien force, the Veul, they take refuge on an ancient planet – a black market trading hub in uncharted space, known as Equan Yas. As the new arrivals on the planet they’re regarded as the lowest echelons of society, in the vast sprawling cyberpunk city of Tuaoni.

Into this world are thrust Izobel Vice, an ex-marine who was cyberised after being injured in combat who is drawn into the sleazy underbelly of Tuaonian society. With each upgrade she loses more and more of her humanity; Prince Tanim, a riches to rags story of a playboy prince who loses everything; and Phaeon Nex, a psychopathic assassin who is contracted to take out a celebrity. The only way he can get close to his target is to have his consciousness transferred into a synthetic child.

The backdrop to the story concerns their fights for survival in a hostile and unforgiving environment, and centers around revenge, redemption, and the political machinations of the movers and shakers of the Tuaonian underworld

AC: The stories of Metal Made Flesh takes the traditional dark urban settings of most Cyberpunk stories and casts it out into the stars into a more Space Opera setting.  How does that thematically affect the story?

Jeremy: It makes it freer for us, as we’re no longer constricted by having to stick within established tropes of the genre and can branch out into deeper territory. Thematically it shares many of the same themes as “pure” cyberpunk – the relationship between the mind and body, what it means to be human, what is beyond humanity, and the relationship between consciousness and organised systems. It also explores the nature of inequality and power in this kind of environment, too.

AC: You guys met 5 or 6 years ago, what was it that first brought you together?

Jeremy: We met at MCM London Comic Con where I was working behind a table. I saw Simeon’s artwork and his proto-story for the world and realised the potential of it immediately. A couple of meetings and beers later and we were working on the script for Flesh.

AC: Simeon, you’re credited as the creator of Metal Made Flesh. Did you start with a set of character designs or an original piece of art which kicked off the whole thing?

Simeon: Yes it started around 2003, I was working in a call centre in Brighton to fund my next backpacking trip to south East Asia or something. I started drawing mercenaries on the back of memos. I wanted to design a small squad who all had very distinct designs. Izobel came first and most of the world grew around that cyberpunk concept. I wanted to create very harsh world with heavenly visuals but a hellish environment.

Had this story been floating around in your head for a while?

Simeon: I ended up with a mountain of concepts and portraits of all these cyberpunk characters and it soon evolved into like an illustrated story titled ‘Hunters’ .

I made like 30 copies or something, they’re probably floating around there somewhere,but it wasn’t very successful. There was a mix-up with the edit and a very rough version went to print, absolutely littered with spelling mistakes and grammatical errors. I think it got one review. The guy had a field day ripping it to shreds. He did praise the artwork though so it wasn’t all bad.

So anyhoo, this original concept and elements is part of what we’ve been pulling from and expanding upon, in part, story wise. The rest is me and Jez throwing in stuff we love and a few in jokes. 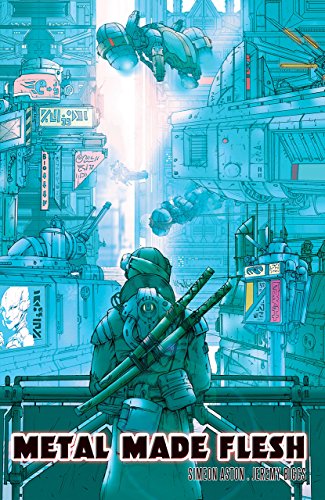 AC: What were the stories and creators that first attracted you both to the Cyberpunk genre?

Simeon: My art and design style is heavily influenced by production design and anime.

I think I kinda ended up at cyberpunk as part of a natural progression from Salvador Dali to H.R. Giger to Ralph McQuarrie and Syd Mead. Their incredible concept art inspired me and lead me to seek out the science fiction classics like Bladerunner which lead to AKIRA and so on.

Jeremy: For me: Bladerunner, AKIRA, Ghost in the Shell, Neuromancer, The first Matrix film, even Snow Crash or Existenz. I love anything that merges technology and the body. I see Cyberpunk, in many respects as being a continuation of William Burroughs work (language as a virus and so on), who was a big influence on me, growing up.

AC: How does your collaborative process work? Do you live in the same part of the UK or is it more of a virtual collaboration?

Simeon: No, he lives in Gloucester. I’m based away down south in Brighton. We meet at Conventions and in London for a catch up and a pint now and then, but mostly we work together online. We also Skype or phone too. Sometimes it’s best to chat live to better convey ideas or brainstorm concepts.

Jeremy: We have different ways of working. With the prose story “Flesh” Simeon had a plot and rough sequence of events and my story was a treatment of that. Originally Simeon’s idea for Made was much different in terms of the events, but the rough kernel of the idea was Simeon’s. I brought to the table Tanim as a playboy (originally he was more of a withdrawn scientist), and his character development arc. Metal was inspired by some artwork Simeon had painted for Izobel, and I provided the main plot with lots of collaboration from Sim.

For the overall arc we’ve collaborated quite closely on where we’re going, with Sim having final sign off on the direction. My role then is to lay the groundwork for this end game.

With the comics, Infection was pretty much 50/50, and the remainder of my stories with Sim, he hands me the finished pages and I complete it marvel style retrofitting the words to the stories with a rough script that he’s provided. For Blood and Oil, Vengeance and Deception, I’ve written the plot with a view to laying the right story beats to get us towards the main story arc. 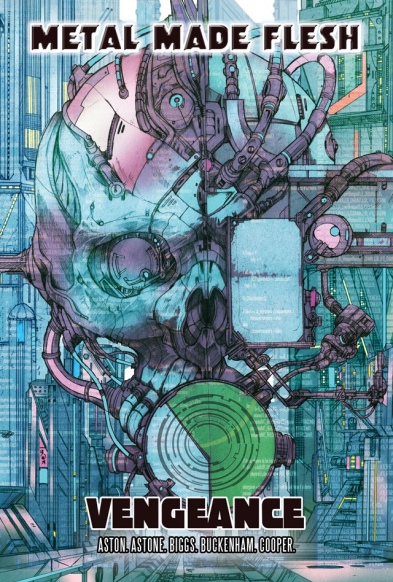 I like the different ways of working as it keeps it fresh all the time, and ultimately the best idea usually wins.

AC: Simeon, talk me through your art process.  What technique do you use to bring the world of Metal Made Flesh to life?

Simeon: To create the world of MMF I hand draw all pages in pencil. I use Photoshop for colours and effects. I used to draw each panel element separately and spend hours toying with the composition when we produced Book One. But as I’ve progressed I’ve learned to work on one page and plan everything out with rough layout sketches beforehand.

Simeon and Jeremy will be back later this week to talk Cyberpunk Cinema Classics, working with Grant Morrison and the future of Metal Made Flesh.