Money, it’s a strange kind of magic isn’t it.

Unless you get paid in cash for everything you do and have found a way to pay for everything with cash there’s a really good chance that you’ll never see half the money you ever make. 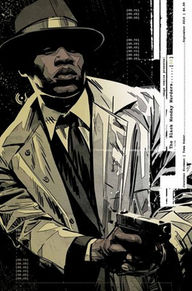 You pay the rent

You take an Uber to a show

And it’s all just magic.

The ritual of keying your pin or tapping your card or typing a PayPal password.

It’s all just magic, the magic of ones and zeroes and dollars and euros which hold the world together.

This is the world of Black Monday Murders by Johnathon Hickman and Tomm Coker.

I know this book has been out for about 9 months now but I have been waiting for this first collection of the first 4 issues to come out to dive into the Occult, Noir World of Big Business and Global Finance which Hickman and Coker have intriguingly teased us with.

The black, diabolic heart of the Black Monday Murders is a classic murder mystery.

All the trappings of a classic Noir are present.

A rich and powerful man has died under mysterious circumstances.

An intrepid but damaged Detective has been assigned the thankless task of trying to cut through the webs of intrigue, lies and secrets to try and bring the murderer to justice.

A Fatale, who knows more than she’s letting on, watches in the sidelines as the mystery unfolds waiting for the right time to make her next manipulative move.

The foul stench of money, the corruption that it brings and the veils of secrecy it lowers are everywhere.

As the story unfolds it becomes clear that very little is what it seems.

There are sinister more powerful forces at play and there is a dark and hidden truth at the heart of everything which those forces will kill to keep hidden.

Hickman and Coker have masterfully created a world which seamlessly combines these classic crime genre trappings with a rich Occult tapestry of intrigue.

The reader is drawn into a dark world where ancient and powerful banking families; Rothschild, Bischoff, Ackerman and Dominic manipulate unseen magical forces as easily as they control the global money markets and trading floors of Wall Street.

There is more than enough real world evidence of the strange and surreal lives of the members of the Rothschild dynasty that any Conspiracy enthusiast will find this world and its inhabitant instantly intriguing and intoxicating.

Hickman flexes muscles left long dormant in his time at Marvel employing story telling tools like partially redacted interview transcripts, family correspondence and Dow Jones statistics in a way that is reminiscent of the back matter used by Alan Moore in books like Watchmen and the League of Extraordinary Gentlemen.

If you’ve read any of Hickman’s IMAGE original series such as the Nightly News, the Manhattan Projects and Pax Romana you will be familiar with Hickman’s meticulously crafted information rich approach to story telling.

The occult imagery is both overt and subtle before you’ve even opened the page and read a single word. The front cover of this collection confronts you with the pagan iconography of the Ram’s skull on the front cover, an exultation to Mammon the Biblical Lord of Greed and the subtle crediting of the Fallen Angel Abbadon as a series creator.

The book itself is littered with Occult and Hermetic Lore expanding on the links between the Banking Cabals of the four powerful families and Magical Lore.

The transition between scenes and chapters is marked by stark white pages often marked with glyph and rune or the faux-type written guides to the dark art of economic theory, rituals of alchemy and the pagan calendar.

Tomm Coker matches Hickman step for step and body for body as an artist and collaborator.

Character  and set design clearly establishes the  many settings and locations as well as the three time periods that the story is unfolding over between the Great Crash of 1929, the Titular Black Monday of October 1987 and the present day.

Page lay out and panel construction create a sense of anxiety and claustrophobia.

The otherness of the arcane elements of the story are haunting and haunted hinting at a strange and sinister world lurking just under the surface of our own.

Colourist Michael Garland employs a limited colour selection of bold high contrast black and white highlighted with tones of grey, red and brown to reinforce the bleak and corrupted world inhabited by Hickman and Coker’s characters.

Black Monday Murders if a masterful first volume which introduces the reader to a world which is simultaneously alien and familiar. A world where the price of the power and privilege enjoyed by the ruling elite is paid for in blood and treachery.

You can pick up this first volume through Amazon, read it digitally on Comixology or ask the folks at your friendly neighborhood comic shop to order a copy for you today.