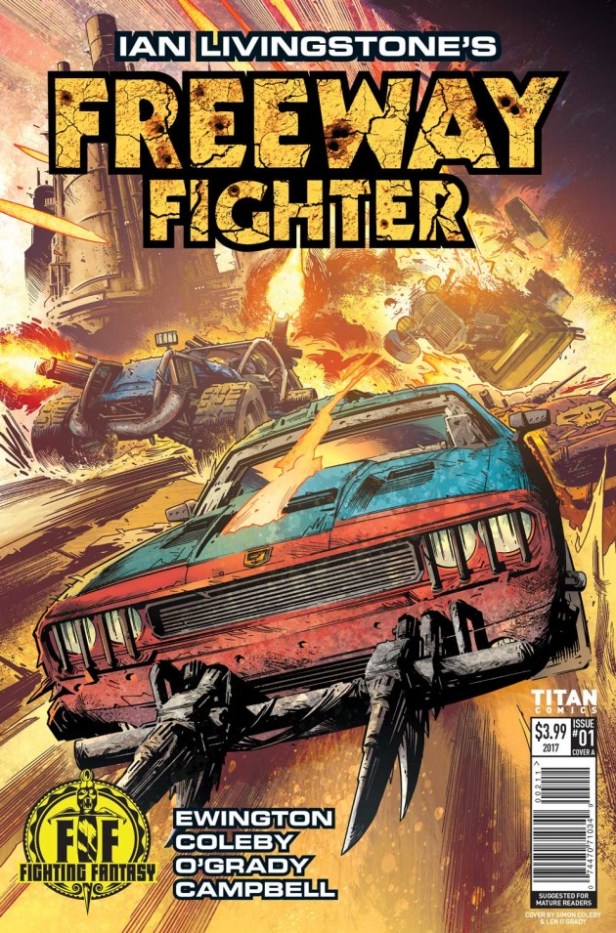 There is something about those original 50 or so Fighting Fantasy Gamebooks which are an intrinsic, indelible part of my childhood.

From the painted Heavy Metal Magazine inspired covers to the black and white interior art to the iconic green spine and mast head.  To me there are as part of the 80s Zeitgeist as Snake Plisken’s eye patch, Freddy Krueger’s Glove or a Care Bear Stare.

And I suspect I am not the only one who feels this way.

Although the fame and fortune of the Fighting Fantasy Franchise has waxed and waned over the year it’s never really gone away.  Steve Jackson and Ian Livingstone’s creations have always been with us in our hearts and minds and on our bookshelves.

And now on the cusp of the 35th Anniversary of the release of Warlock of Firetop Mountain UK Publisher Titan Books has released this new miniseries adapting and expanding on the world of one of the few Fighting Fantasy books not set in a traditional Swords and Sorcery, Tunnels and Trolls, Dungeons and Dragons World.

Both the original Freeway Fighter Game Book and this comic series don’t stray to far from the source material.

As the title suggest, and as Ian Livingston admits in his intro, this is a straight reworking of the world of movies like Mad Max and Death Race 2000.

This comic series updates the look with a visual nod to more modern post Apocalyptic Wasteland Worlds like Fallout. 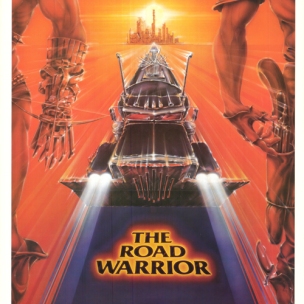 We are given the barest of introductions to our protagonist in a flashback to the days before an Apocalyptic Event has wiped out 85% of the worlds population.

Bella De La Rosa was a stock car driver in some sort of NASCAR analogue and she now applies to the skills she acquired in the concrete caverns of the racing circuit to the endless wastelands and furious roads of post Apocalyptic Earth. 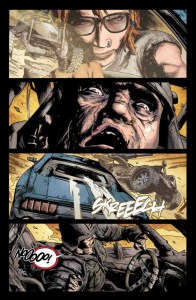 The action comes at you pretty thick and fast as Ewington and Coleby use action set pieces to set the tone and pace for the world to come.

There’s the conflict with another nameless Road Warrior over precious petrol and the desperate scavenger search for food and water all set against a washed out sandy red desert of an unnamed future America.

There is a very Cursed Earth 2000 AD feel to the story and world which again speaks to the origins and tropes of the post-Apocalyptic genre in the Science Fiction of the 70s and 80s. Artists Simon Coleby is a journeyman of 2000AD / Judge Dredd stories having got his break working on Future Shocks and Rogue Trooper stories in the late 80s and early 90s so I guess that’s no surprise.

Coleby uses some great panel design combining John Cassady style widescreen letter box panels with splash pages to create tension and excitement.  There is a real sense of speed as you flow through the pages. 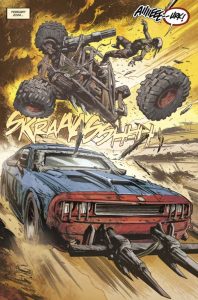 But, it all feels like it’s over much too quickly.

There is no real character development or definition for Bella apart from the flashback sequence at the start of the issue.  No character arc or antagonist arc established.

All in all this leaves Freeway Fighter Issue 1 feeling more like a prologue, zero issue or a pre-credits sequence.

Maybe this is just a matter of pacing and how this will play out and pay off over the remaining issues of this 4 issue miniseries.

If you’re a fan of the genre or nostalgic for your youth devouring Fighting Fantasy books in a quiet corner of the school library there’s enough to enjoy to justify the price of admission but I can’t help but feel there’s a lot of untapped potential in Bella’s story.

Freeway Fighter is available from the official Fighting Fantasy Website or through Comixology.