The first thing that drew me to Pozios and Sanchez’s Time Grunts was the striking promotional image you see above of an anachronistic Axis Army consisting of mounted knights in full plate armour and 21st century Shock Troops marching onward to victory while a squad of Stealth Fighters roars overhead.

Underneath this is the ominous text:

For If We Control Time, Who Can Possibly Stand Against Us

If that doesn’t sell you on Time Grunts, or at least leave a LITTLE bit curious then you should probably just skip the rest of this piece and go and read my review of Transformers or Metal Made Flesh.

With Time Grunts Pozios and Sanchez bring us another take on one of the comics’ genre staples, alternate history takes on World War II. From Captain America punching Hitler to the Freedom Fighters leading a noble resistance against Nazi occupation the notion of how the second World War might have been different has been a part of mainstream American comics almost since the Golden Age.

Time Grunts is not a world of Nazi punching Mystery Men however.  It takes its queues more the worlds of Indiana Jones and Hellboy by speculating about what might have been had the Nazi’s obsession with advanced technology and the occult born fruit.

The action in this second issue takes place on the Polish / Czech border in the winter of 1944/45.  The tide of the War has turned in the wake of the D Day landing and the German armies are finding themselves fighting a losing battle against the advancing Allies in the West and the resourceful Russians in the East.

Our heroes are a squad of American soldiers on a mission to infiltrate and destroy a Top Secret Nazi Base home to the mysterious and powerful Zeitwaffe, the German Time Warriors.

The German Army has attained mastery of time itself through the creation of a Time Capsule known only as Die Glocke, the Bell.  They plan to use the power of the Bell to turn the tide of the War using anachronistic future tech such as high powered weapons and Stealth Aircraft to repel the advancing Allied Forces.

The Nazi Bell, a strange super science device developed by German Scientists, is an idea first popularised by Polish writer Igor Witkowski in his book The Truth About The Wunderwaffe.  It is a Wunderwaffe, or Miracle Weapon, allegedly created by Nazi Scientists in part of their quest to blend occult magics with science in the search for such holy grails of pseudo science as Anti Gravity Technology and Zero Point Energy.

After a successful sabotage mission destroying a train bound for the Zeitwaffe base our suicide squad meet a mysterious girl known as Ella. Ella claims that the she is on her way to the Nazi base after the German forces have kidnapped her parents but I suspect there is more to her than meets the eye. 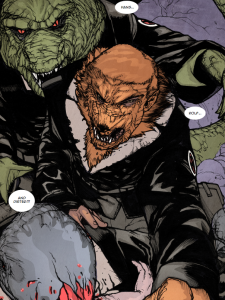 This is a debut outing for Pozios to the best of my knowledge.  In addition to being a lifelong fan turned creator Pozios is a modern day renaissance man according to his Twitter bio dabbling in law and hospitality.  If this is true this is very strong debut.  The issue is well paced and concisely worded.

Alex Sanchez has worked for the Big 2 as well as some high profile indie assignments including stints on books like Katana, Star Wars and Battle Star Galactica.  He has a very “house style” approach to the clean line work of his art and a strong eye for clever panel design.

Things really kick up a gear in the second half of the issue as our intrepid band of brothers, and Ellam prepare for their final assault on Time Nazi HQ.

There’s a lot to like about this issue of Time Grunts, especially if you’re a fan of Weird War Comics.  You’ll like it even more when I tell you can read issues one and two FOR FREE on the Time Grunts site.  If you’re are in or can get to the Tampa Bay area you’ll be able to pick up a physical copy at Tampa Bay Comic Con at the end of July.