A wise man once said, the life of a superhero is great and all but it won’t pay those gimmicks they keep sending in the mail called bills.

Clark Kent provided the Daily Planet with unique perspectives on the life and adventures of the Man of Steel.

Even Green Lantern Alan Scott worked in the railways before discovering his magic lantern.

Captain Mega, the hero of Rohan Fraser’s Blokkan,  is another hard traveling hero who has resorted to taking on corporate sponsorship to make ends meet.

The once mighty hero Captain Mega has been repackaged and relaunched as Captain Menthol, spokesperson / vending machine for Palm Cove Cigarettes!

Captain Menthol is here to bring the one-two mega punch of heroic nicotine to men, women and children everywhere! 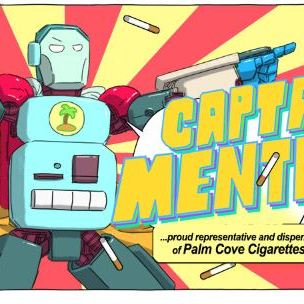 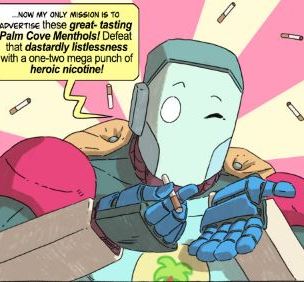 Welcome to Palm Cove Part One is the Fourth chapter in Rohan Fraser’s stories from the world of Blokkan.

The full colour, action adventures of Blokkan take place in an alternate 1990s where Earth’s most powerful robots once formed together as the Blokkan to combat a mysterious alien menace known as the Metamen.

But now the Metamen threat has passed and our mightiest heroes like Captain Mega are forced to take on other, more humble, rolls just to get by.

As a life time comics fan and cartoon devotee Blokkan is a real treat combining classic comic book and anime sensibilities with cartoon influences ranging from 80s and 90s classics such as Sam and Max, Animaniacs and Futurama through to contemporary cult cartoons like Adventure Time, Steven Universe and Bob’s Burgers. 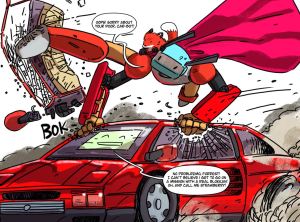 But perhaps more importantly, my eight year old son LOVED THIS COMIC.  He was on board and all in from the first time he saw the promo images on the Blokkan site and now can’t wait to find out what happens next.

There has been so much discussion over the last year or two about the role that AA and YA Comics will play in the future of the comics industry and Blokkan is a book which could slot effortlessly into a spot next to titles from BOOM! and IDW like Lumberjanes or Goldie Vance.

The plot moves fast with the pacing of a 20 minute episode of Samurai Pizza Cats or Pinkie and the Brain.  The dialogue is clever and genuinely laugh out loud funny.

Rohan’s approach to visual storytelling effortlessly brings the world to life with a clear and simple style. This is then rendered in glorious super saturated colour to make the world bright and cheerful.

Fraser has also planted a bunch of call backs and Easter Eggs to anachronisms from 90s for the eagle-eyed older readers which is very reminiscent of what you would expect from Brandon Graham’s King City.

The fact that I was instantly able to imagine a soundtrack for this and the other issues of Blokkan that I read also speaks to Fraser’s ability to create a clear sense of mood, tone and setting for his world and his characters.

There’s a definite retro electronic vibe to this book whether you’re talking about the French Robo Dance of Daft Punk’s soundtrack to Tron Legacy or one of the weekly Vaporwave / Retro Synth releases from Business Casual.

Discovering a book with the energy and originality of Blokkan was a real and rare treat, doubly so to find that it being created by someone from own home town in South Australia.

Welcome to Palm Cove Part 1 is a great jumping on point but I really recommend you read all the first four chapters which are available for free right now on the website.

Once you’ve done that you should follow Team Blokkan on Twitter and Instagram and then head on over to Rohan’s kickstarter, back the project and pick up your collection of all the Blokkan stories to date and the as yet unpublished conclusion to the Welcome to Palm Cove story.

One thought on “Review: Blokkan Welcome to Palm Cove Pt 1”