An Interview with Peter Simeti, the Publisher of Alterna Comics

Advance Comics: Hi Peter can you tell me a bit about how you got into making independent comics?

Peter Simeti: I think it’s the same way anyone gets involved with making comics. You get bitten by the comic bug and your life is forever changed.

Advance Comics: You are the publisher of Alterna Comics, what can you tell us about Alterna?

Peter Simeti: Alterna is a creator-owned comic company and we’ve been around since 2006. We’ve published over 100 titles in our time including an NY Times Best-Seller (FUBAR Empire of the Rising Dead… which celebrates a 5th anniversary re-release this December) and countless other well-loved and well-received titles.

Advance Comics: You recently ‘Brought back Newsprint’. What were the decisions behind that, how important is it to provide affordable comics to consumers?

Peter Simeti: The reason should be obvious, right? People only have so much disposable income to spend and there’s a plethora of things to spend it on nowadays.

Hopefully people love the stories we’re putting out and the fact that they can buy four of our comics and have room left over to maybe try out one or two other creator-owned titles as well.

Advance Comics: What titles are currently being published by Alterna?

This year we also have graphic novels coming out like Unit 44, Cyko KO: A Comic Book Adventure You Can Color!, the 2017 IF Anthology: CRIME, and the 5th Anniversary Edition of FUBAR Empire of the Rising Dead.

Advance Comics: What is coming up next for Alterna?

A We’ve got a full slate for 2018 so we’re in the process of preparing for that while also printing and promoting the rest of the lineup for this year.

Advance Comics: Apart from being the publisher of Alterna Comics, you write and draw comics yourself. Can you tell us a bit about your own work and The Chair?

Peter Simeti: Well, The Chair is a psychological horror thriller that takes place on death row. The story follows one particular inmate, Richard Sullivan, who’s been pushed to the brink of his sanity from his time on death row. He believes himself to be wrongfully imprisoned and he’s fighting to survive against a backdrop of sadistic and psychotic prison guards and a crazed Warden. I did everything on The Chair except pencil it. Kevin Christensen did a great job on the pencils and I had a blast digitally inking over them. 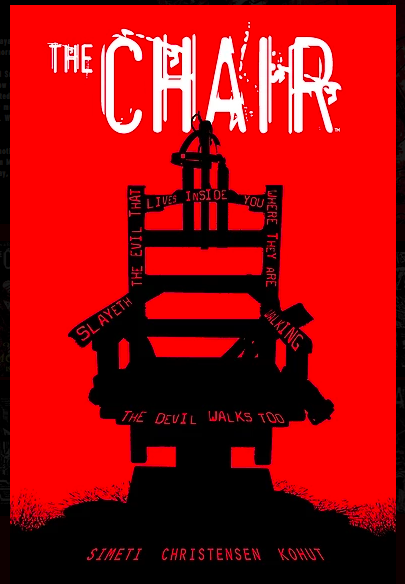 Advance Comics: How can people get their hands on Alterna Comics?

Peter Simeti: Go to your local comic shop or wherever comics and graphic novels are sold.

Advance Comics: What is your best advice to creators wanting to make comics and get published?

Peter Simeti: Learn as much as you can and be prepared to work harder than you’ve ever worked before. Don’t expect success, keep your ego in check, and realize early on that there’s no easy path – put in the time if you want the results.

Advance Comics: Thank you Peter for your time.

Alterna Comics can be found online at www.alternacomics.com and in an increasing number of good comic shops worldwide. We encourage you to check out their titles and give these excellent and affordable series a go! If you enjoy them let your LCS (Local Comic Shop) know so that they can order more Alterna for their shelves!