In ancient times of legend a wise and noble King is forced to make a Faustian Pact to protect all the holds dear.

Centuries later Ash is a normal guy trying to live a normal life until the skeletons in his family’s closet come back to haunt him. 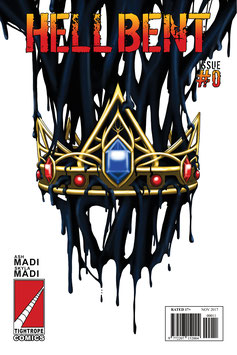 Welcome to World of Hellbent by Australian creators Skyla and Ash Madi.

Skyla is a bestselling author of romance fiction who has chosen to use the 8 panel grid of a comic’s page to bring Hellbent to the world.

Hellbent sees her teaming up with her artist husband Ash to produce this dark fantasy tale of the sins of the father.

Advance Comics talked to Skyla and Ash about the inspiration behind Hellbent, the challenges of transitioning from prose to comics scripts and Ash’s evolution as an artist.

Advance Comics: Skyla, you’ve been writing professionally for the last 5 or so years haven’t you?

Skyla Madi: Yes. I’ve been writing professionally since 2012, under contract by Limitless Publishing.

AC: And you’ve focused mainly on romance fiction is that correct?

SM: Romance is the only genre I write and will write, but I do tend to switch between a lot of romance sub-genres such as: romantic suspense, sports romance, dystopia, contemporary, new adult, erotica, dark, and paranormal. Just to give my readers the “same old romance”, but with exciting new twists and formulas.

AC: What made you decide to branch out into comics / graphic fiction?

SM: In 2014-2015, I self-published a serial (a series of novellas) before it was signed over to a publishing house. I learned so much during the process of doing everything myself that, when I saw Ash re-discovering his love of drawing, the idea of creating/writing a comic book popped into my head and I thought “why not try it?”

AC: What is it about the story of Hellbent that means it’s best told in comic form as opposed to prose or some other format?

SM: I started out writing paranormal romance and Hellbent was originally going to be written in novel format. In 2013, I made a decision to switch my sub-genre to what was “hot” in the marketplace at that time—sports romance. With the debut of my sports romance novel, Consumed, my fanbase changed dramatically and increased tenfold. All of a sudden, I had this crazy workload and couldn’t fit in the time to write Hellbent. It didn’t seem like a good career move at the time to go back to what I was doing beforehand so Hellbent, the novel, fell to the wayside.

It worked out really well, though. The story is even better than what it was when we had originally plotted it out all those years ago and I’ve grown so much as a writer.

MF: What were your influences in creating this story?

SM: I’m not sure I’ve had any exterior influences for creating Hellbent. I’m a HUGE plotter so I just jot down dot points and expand them as the story calls for it, seemingly without thought. That being said, there have been times when I’ve wanted to put something in, but I’ve stopped and thought “what would the Winchester’s do?” (Supernatural) I don’t know if that counts as influence. Mostly, I will just write “demon attacks etc.” and then leave all of the creative design to Ash and see what he comes up with.

AC: How does your experience as a prose writer influence your approach to writing comics?  Were there any habits or techniques you needed to learn or unlearn?

SM: To be honest, I still have no idea what I’m doing. I find comic writing so incredibly hard in comparison to writing novels. I’ve always considered my weakness to be dialogue and, I’ve found that, comic writing is 90% dialogue as the descriptions are usually told by the drawings.

I’ve had to learn how to phrase a sentence or a conversation in a way where the picture can explain the rest. Plot writing for a comic, for me, is very different to writing a plot for a novel. Breaking everything down, but keeping it face paced and “interesting” every two or three pages, can be quite exhausting. I’ve had to learn how to take a plot from a “long distance” race to a “sprint”, so to speak, and I struggle.

AC: Hellbent seems to synthesize a lot of common ideas from the dark fantasy genre what do you think makes your story stand out?

SM: Although we started our comic series off with the cliché of a man who sells his soul to the devil out of desperation, we have added our own unique twists and plot devices and focused our main story not around the person who made the deal, but consequences of such actions and how it affects another life, in a different time period. We tailor classic characters, such as the devil, to our own design. For example, we gave him little quirks here and there rather than relying on his brute force and the fear he’s more commonly known for. 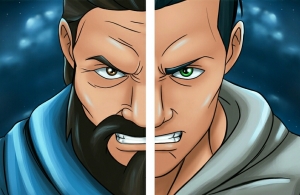 MF: Issue zero serves as a prologue, the pre-credit sequence if you will, before issue one moves us to the modern day and introduces us to Ash. What should audiences know about him?

SM: Ash, our main character, is a descendant of King Daryan from Issue zero. He’s a simple man, living a simple life, unaware of the plans that have been set in motion due to the selfish actions made by his royal and desperate ancestor. Other than the chaos that circles him, he’s a normal, modern guy in his mid-twenties who just wants to live a cruisy life.

AC: Ash I believe this is your first full length comic book work is that correct?

Ash Madi: Yes, this is my debut comic series. Up until starting Hellbent, I was only drawing as a hobby.

AC: What made you decide to take the leap from hobbyist and enthusiast to making your own regular 25 page comic?

AM: As Skyla mentioned, Hellbent was originally planned out as a novel. However, with Skyla’s schedule, it became less and less realistic. In 2015, I rekindled my love of drawing and a year later she suggested we convert Hellbent into a comic instead of a novel, with me as the artist. I turned it down at first as I felt I wasn’t ready to take on such a huge project, but I really enjoy the story and I want to get it out there so others can enjoy it too. That’s what made me take the leap.

AC: How does that fact that you’re a married couple influence your relationship as collaborators?

AM: The positive is that being in the same place makes the plotting and planning easier to do. Any changes that need to be made can be done quickly without back and forth email communication. The negative is that as two creative types (working on the same project) we do tend to butt heads when trying to decide which idea to go with.

AC: As self publishers how did you overcome the challenges of printing and distributing your own book?

AM: We had/have to be very precise with our choices since all of our expenses are out of pocket as opposed to relying on Kickstarter etc. Seeing as though we do the art and writing ourselves, the first step was to find a printing company that wasn’t over-priced, but still offered quality service.

Networking and distributing locally (Australia) isn’t too much of a problem, but we’re still trying to figure out how to distribute overseas in a more cost-effective way.
Also, because everything is out of pocket, we print small quantities of each run, usually only one hundred or less, before it goes into second printing.

AC: Skyla, has there been much crossover between your existing fan base and readers of Hellbent?

SM: There has been more of a crossover than I was expecting. I didn’t think there would be as my readers are solely romance novel lovers and comic reading so far from what they like, but I know how to market it to them by emphasizing the romantic relationship between our two main characters. Hellbent has also been a “comic” first for a lot of them, so that’s exciting!

AC: What are your future plans for Hellbent, is a finite story or is it planned as an ongoing?

SM: Hellbent is a finite story. With it being our debut comic series, we are capping Volume One at around five or six issues. That being said, we will leave room for a continuation, if need be. We have discussed an alternative ending for the series if we choose to continue with a Volume Two and beyond.

Hellbent is available now through the Tightrope Comics online store and Comixology. You can also check out Skyla’s prose fiction on her Amazon Author Page.

Once you’ve done that head on over to their Facebook and Instagram pages for the latest on Hellbent.

3 thoughts on “the Hellbound Heart: Skyla and Ash Madi”