the Demon: Issue 4 (self published)

If neo-pulp Superheroes are a thing (and Google seems to suggest that they are), then Matt Kyme’s The Demon must surely be one of, if not the best examples of them..

Melbourne-based creator Matt Kyme returns with the next chapter in the saga of everyone’s favourite ghost-faced mystery man, the Demon.

The Demon was recently shortlisted for Australia’s premier comic industry award, the Ledger Awards.  It’s easy to see why with this lovingly detailed accurate recreation of a classic pulp newspaper strip from the 30s or 40s.

The Demon is the perfect throwback to the early to mid 1930s where square-jawed Pulp Heroes like the Shadow, Doc Savage and Dick Tracy gave way to their cape and long underwear wearing brethren at the beginning of comics’ Golden Age.

Our hero, Thurston Cole AKA the Demon, is a homage to classic pulp and Golden Age characters like Wesley Dodds, the Golden Age Sandman, or Alan Scott, the Golden Age Green Lantern. He’s a dashing and devil may care captain of industry who adopts the persona of a lazy, good for nothing playboy to provide cover for his never ending quest for justice as the Demon.

But no hero looms larger over Kyme’s pages than the Phantom, the Ghost Who Walks.  When we caught up with Matt earlier this year he talked to us about his love of Lee Falk’s legendary crime fighter and its influence on his career as a comics creator. 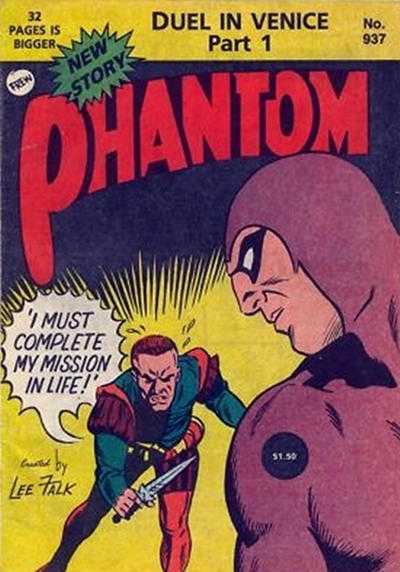 The Phantom’s finger prints are all over the Demon and Kyme make’s no attempt to hide this both in the story itself and its back matter. From the cover and logo design to the wisdom of our hero’s “Old Demon Adages” to Kyme’s production company being cheekily named “Queen Features Syndicate”. It all speaks to a deep affection for Lee Falk’s legendary creation.

Every aspect of this book from the cover to the interior blurb to the paper quality and page design is in service to the art of creating a post-modern take on a classic newspaper pulp strip for a contemporary audience.

This issue “collects” a legendary 1937 Demon Strip, the Captives of Colombo, which has not seen the light of day for nearly 60 years according to the preface at the start of the issue.  Its a classic crime tale of an attempt to ransom a Hollywood starlet gone wrong. We see the trappings of a classic pulp hero story. We’ve got reedy Mobsters and their Mooks, the glitz and glamour of Hollywood and the exotic foreign jungles of Ceylon / Sri Lanka.

Comparisons to often overlooked 1990s Sandman Mystery Theater run by Wagner, Seagle and Davis immediately spring to mind but Kyme goes on step further in embracing the conventions of comics from the so-called Platinum Age.

Both stories tackle some of the more problematic aspects of Pulp Stories such as the representation of women, race and the “exotic” locations of “Darkest Africa” or the “Mystic Orient” but the Demon eschews the “mature readers” approach which Sandman Mystery Theater brought to the dawn of VERTIGO in favour of more purist approach to recreating the scenarios, characters and art style of the day.

Each page of the issue is presented as one week’s worth of Demon newspaper strips with a very orthodox eight or nine panel grid beginning with the Demon’s grimacing ghost face in the top left hand corner and more often than not ending with a “Next Week…..” caption box.

Perhaps Kyme’s greatest trick is to make these stories feel authentic to their source material without seeming derivative and unoriginal.  He passion for Pulp Heroes and Pulp Storytelling is clear and it injects every page and panel with an energy undeniable energy and humour.

Although each issue of the Demon is self contained I strongly encourage you to pick up each of the four issues.  You can get them directly from the Demon Facebook page or from Matt’s store on the Ownaindi Australian Comics Hubs.

You can also keep up to date on the Demon’s thrilling adventures through that same Facebook page or my following them on Instagram.