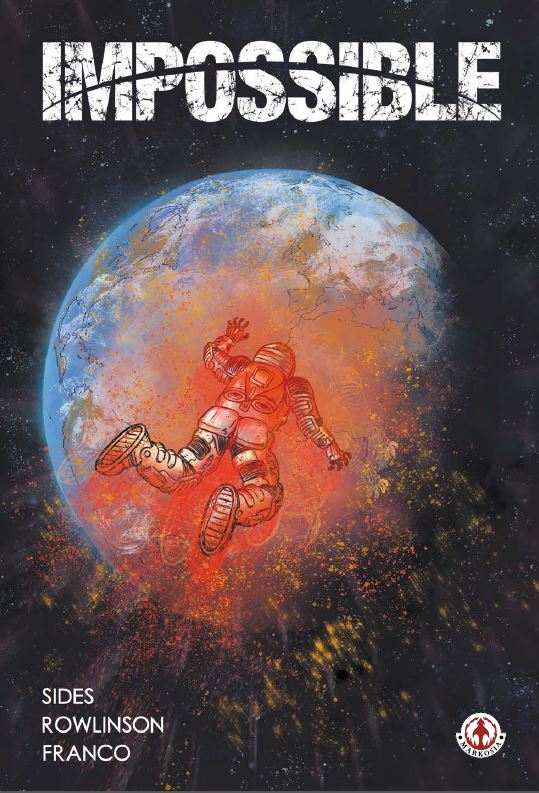 Content Warning: This comics contains violence and course language and is not recommended for younger readers.

Will McGillis is having a very, very VERY bad day.

Will is an ordinary man pushed too far.  An ordinary man who’ll have to do extraordinary things if he ever wants to see his wife and daughter again.

Welcome to Impossible, from Brits Chris Sides and Jake Rowlinson and published by up and coming British indie publisher Markosia.

The year is 2049 and humanity’s attempts to colonise the solar system are thwarted by an increasingly polluted and garbage filled sky.

Specialist crews of galactic garbage collectors are shot up in to orbit to dispose of the debris and detritus of nearly 100 years of space exploration in an effort to open a launch window that might potentially lead to a manned mission to Mars.

Mild mannered physicist Will McGillis just wants to get home to his wife and daughter but he needs that one big payday so he signs up to join the Amala’s clean up crew.

If you probably hadn’t guessed it from looking at the cover or flipping through the preview on Comixology things go terribly, horrible wrong for Will.

It turns out that the crew of the Amala are little more than a gang of treacherous mercenaries with murder on their minds.

Before he has time to think Will finds himself thrown into an airlock and thrown out into the vacuum of space with only one thought on his mind.

With Impossible Sides, Rowlinson and Franco have produced something with the look, feel and facing of a big screen summer blockbuster.

It’s a Die Hard in Space (note to self, remember that one).

It’s a roller coaster thrill ride that will leave you guessing right up to the last it.

Sides has planned Impossible as the first stand alone installment of the Frostbyte Legacy. The Frostbyte Legacy will feature a series of science fiction stories where the common unifying thread is the ubiquitous and sinister Frostbyte Industries.

The art team of Rowlinson and Franco takes Side’s script and build a palpable level of tension and distress with a combination of tight camera angles, effective page layout and moody evocative colours.

Rowlinson’s arts style appears to have its basis in the British 2000 AD aesthetic while echoing Simon Roy’s work on Prophet or Chris Burnham’s art on Nameless, his 2016 Sci Fi horror collaboration with Grant Morrison.  He effectively uses conventional 9 panel grids, splash pages and tight inset panels of the characters faces to create powerful contrasting images of the infinite emptiness of space and the struggle of one man to survive against all odds. 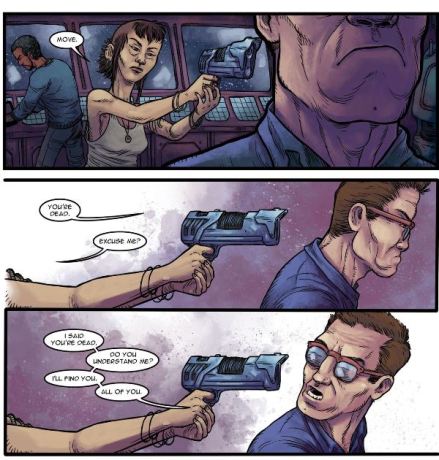 Franco’s colours further enhance this with a palette which blends the bleak industrial blue and grey of the Amala with sickly yellows and greens and violent and distressing red tones.

This issue is rounded out with extensive bonus content including script and sketch pages, pin ups and creator profiles.

Impossible is a bargain at under $3 at Drive Thru Comics or Comixology.  Check out Chris’s website if you’re looking for a physical copy or want to learn more about Chris’s plans for Gunrunner, the second chapter in the Frostbyte Legacy. 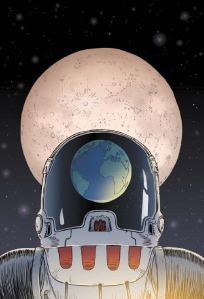 One thought on “Review: Impossible”