The costumed super villain who does whatever the voices in their head tell them to.

The megalomaniac criminal mastermind who sees himself beyond the morality of lesser beings.

The chaotic madman who sheds multiple personalities like layers of clothes.

It seems almost every cliche of mental illness has been played out and probably handed poorly in the pages of Superhero Comics.

In reality millions of people deal with mental health challenges every day. It’s something that deserves to taken more seriously in discussions about health and well being.

In The War for Kaleb Jason Pittman takes many of the familiar conventions of Superhero comics and uses them tell a deeply personal story about anxiety and mental health.

We spoke to Pittman on the eve of the books launch at Rose City Comic Con about the genesis of the Kaleb’s story and the challenge of authentically depicting the protagonist’s struggle with anxiety through the medium of superhero comics. 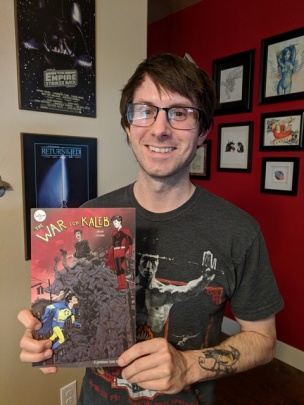 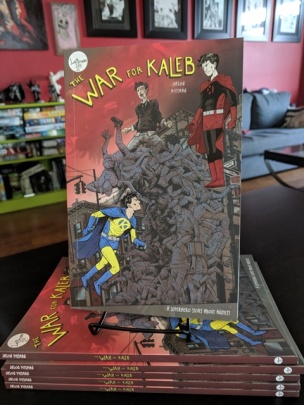 Advance Comics: The elevator pitch for The War for Kaleb is “All Star Superman meets Garden State”. Can you tell us a little more about that?

Jason Pittman:  When I came up with the concept for The War for Kaleb, I actually didn’t have either of those stories in mind at all.  I did however have the influential residue from both those stories on a subconscious level I believe. I love both those stories.  Garden State was a great story about using medication to sweep mental illness under a rug, where All Star Superman was a beautiful character study about the Man of Steel, that I don’t think we ever had before.  It was a superhero book that almost had an indie feel to it, with lots of moments caught in time, straight on shots, and quiet moments. Garden State and All Star Superman, are very similar in that regard. I think The War for Kaleb, became a culmination of those two entities.

AC: Tell us about your background in comics both as a fan and a creator.

JP:  I began reading comics when I was 11 years old in Junior High School.  The decision to not only start drawing, but wanting to become a comic artist, was immediate.  I would buy books, and draw all the time. For me there was something going on in the back of my mind about being able to not only tell stories, but create worlds by adding pictures to the narrative.  It was like the bridge between the literary novel, and a film. You can still dive into the character’s heads, but also see the worlds they inhabit.

I started out at a young age reading strictly superhero books.  When I got into college I began reading independent comics, and stories about life, drama, and coming of age. The main thing was, I remained interested in both genres.

I attended The Joe Kubert School of Cartooning, in NJ, and The School of Visual Arts in NYC.  They are both great schools, and I respectively learned a lot from them.

AC: What made you decide to tell this story and why was a comic / graphic novel the best way to tell it?

JP: This story came to fruition after moving back to Long Island in 2010.  I was in a bad spot in my head, and life. I was working at a warehouse, and the work was highly stressful for me.  I was in my early 30’s and I didn’t know where my life was going. I took my frustrations out on people in my life, particularly my wife, and it was around this time that I experienced my first panic attack.  At the time, I was also acting out my own frustrations in my head, where it was physically safe, but mentally, not so much. One day, those images started becoming panels in a comic, and it was there that The War for Kaleb was born. 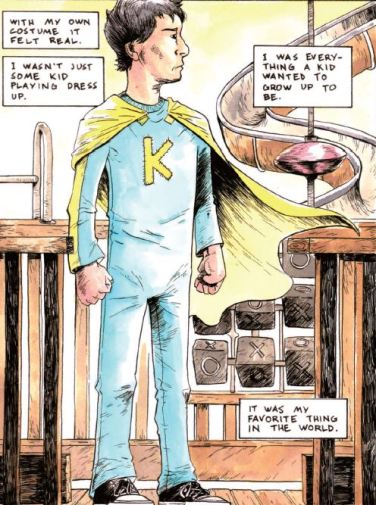 The War for Kaleb works best as a graphic novel, as it allows me the space to create an expressive outlet particularly for Kaleb’s mind.  The biggest issue I’ve experienced having high anxiety, is that the mind does not quiet itself easily. Once it gets itself going, it will constantly remind its own person, that something is bothering it, and it won’t shut up.  The comic book format also allows endless possibilities to the worlds you create within the narrative. There are no budget constraints, and if you are both the writer and artist, you don’t have to rely on a team of people. Other than that, the comic book format, is my very favorite form of storytelling.

AC: Comics in general and superhero comics specifically do not have a reputation for dealing with mental health accurately or positively. With that in mind why did you decide to use Superhero art and storytelling conventions in The War for Kaleb?

JP:  That’s a really good question.  I was a little worried, at first, that people may have thought I treated the situation of mental illness too lightly.  I guess due to the fact that is does indeed have superheroes in it. It runs the risk of stereotypical perception, that it will be just another two-dimensional superhero story.  I guess I avoided this, by just staying honest about the story I was telling. It needed to be self aware. Dark when it needed to be, but also more importantly light and compassionate, when needed.

I think that might be were other books talking about mental health with superheroes falter.  Everything is very melodramatic. And then there is the emphasis that writers and/or artists in the genre put on making “cool” storytelling devices, rather than meaningful devices.  Whereas the action is pasted on top of those stories, the action in The War for Kaleb, I tried to weave into the narrative. In a way, the action IS the mental illness.

AC: The idea of a the angelic and demonic voices in our ears and on our shoulders is a pretty well established idea in fiction. How conscious of that were you in your depiction of the positive and negative aspects of Kaleb’s thought processes? 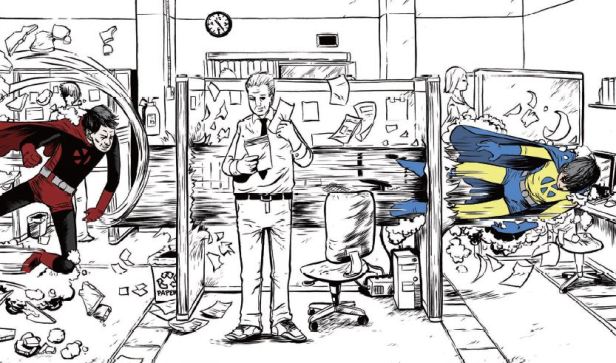 JP:  To be honest, not at all!  I totally see it is there now, and really wasn’t even aware that I did it until another reviewer brought it up.  I was more focused on how the rational mind gets drowned out by the weight of high functioning anxiety.

AC: Having Light and Dark Kaleb be the only colour characters in a black and white story really makes them seem hyper real in contrast to the black and white mundane world. What were your thoughts behind this storytelling tool?

JP:  I think that one of the biggest problems with not only anxiety, but mental health, and how it is treated in this country especially, is that it goes unnoticed, or is just totally ignored.  The idea behind the light and dark Kalebs, is to have them act out the real Kaleb’s feelings, and have his world come crashing down, while the outside world keeps going as if it isn’t happening.

The color came into the picture for a couple of reasons.  One, the color helps them stand out from the real world that is black and white.  The other reason, is the color creates this fantastical element that comes with the magic of the superhero comic.   Without it, I feel that the impact, or even the fact that there are superheroes in the story, would be lost to the rest of the narrative.

AC: Kaleb’s decision to stop taking his anti anxiety medication is one of the inciting events in Chapter 1. How does this reflect your own experience.

JP:  When I was living in New York City, in the early to mid 2000s’ I had started medication for a very brief period.  It was a terrifying experience, as it made my anxiety hyperactive. I went off of it in fear of what it would do to me.  All my life, I have never done drugs, or even drank alcohol. I’ve had many people in my life that have fell victim to the addictive qualities of substance abuse.  In turn I’m basically afraid of things like this. I’m not condemning medication, and nor do I in the book. However, I knew this was something that followed me around for so many years, trying to decide whether or not I needed to go on medication myself.

AC: There is an authenticity to the self talk which forms part of the narrative. Why did you decide to make Kaleb’s inner monologue so prevalent in the story?

JP:  The inner monologue is important, as this is almost exactly what it sounds like in my head when my anxiety takes the wheel.  Kaleb, having an anxiety disorder, takes a backseat to the panics, of fear and anger. The self talk becomes so important because we get to see the jumbled mess of thoughts going on in his head.  He can’t focus, or take control. His mind goes on autopilot, and nothing is coherent, or rational.

Again, to reinforce your previous question about, why I chose comics to tell this story, you really need to see this internal dialogue.  Not just to be able to read it, but sometimes have it hard to read, hence the overlapping caption boxes. It’s as if no sense can be made of Kaleb’s thoughts, including to himself.  Comics are a great way to visualize something like this.

AC: What do you hope readers take away from this story?

JP:  For those that suffer from anxiety, I hope they understand that they are not alone. I initially wrote the story because I thought that I was alone.  It wasn’t until the first time a reader emailed me after buying it from a convention, thanking me for writing it, and the book portraying how they felt accurately. That was the moment I didn’t feel like I was the only one. The book became a symbiotic bridge between myself and the rest of the world, and for that I’m grateful.

Then for those, that have loved ones with anxiety, I just hope that it gives them enough insight to be able understand the disorder a bit more.  I feel fiction is a wonderful way to get to walk in someone else’s shoes. This is especially true to understand, and empathize with other cultures, genders, sexes, races, and even mental illnesses.  We, as individuals, will never be able to truly understand what is like in someone else’s skin that is not like our own. But art is closest we have to getting there, and I feel is vitally important to connecting to each other as human beings.

AC: Do you think it will generate more and healthier conversations about mental health and anxiety?

JP:  I certainly hope so.  Mental health practitioners have been using the book as a means to connect with their patients, and I have heard it is working well.

As far as outside the realm of the Mental Health Industry, I really hope that families can use the book to connect with and communicate with each other what anxiety does to them.  After I released the book, there have been so many long time friends, and lifetime family members that came out to me about their own anxiety, that I had no idea. So the fact that the book is helping them come out of their shells and confide in others is amazing.  If anything, I’m super proud the book has been accomplishing that.

The first chapter of the War for Kaleb is available for free on Jason’s website.  You can pick up your copy of the complete collection while you’re there. 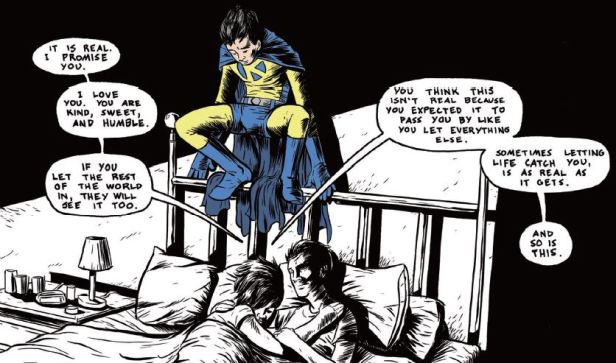