Titanic struggles between good and evil in West Texas, a teen mother with something wicked growing inside her belly and hillbilly bloodsuckers… It’s all in a day’s work for up and coming writer Donny Cates. 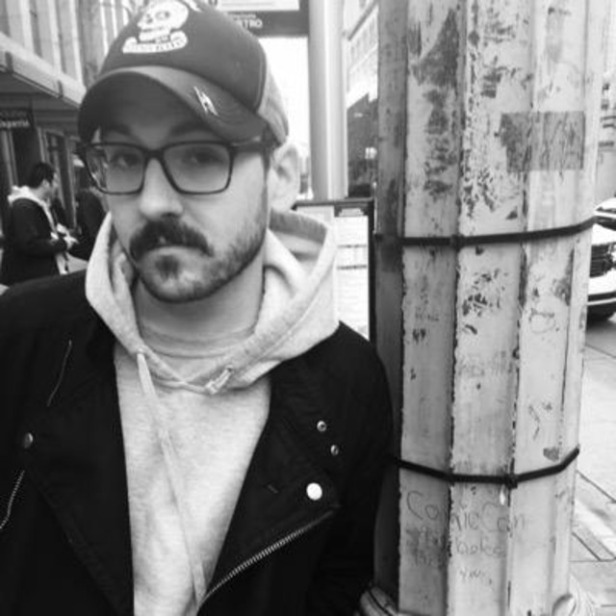 Matthew McIntyre: What made you want to get into comics and how did you start writing for comics?

Donny Cates: My dad actually taught me to read using comics when I was a kid. So in a way, I kind of spoke “comics” before anything else.

As far as the writing thing, I actually didn’t even start writing at ALL until around 2007 or so (wow, when I type it out I’m suddenly aware that it’s been ten years. Crazy!) when the comic book stores I was running shut down, I thought maybe I would give it a shot seeing as how I’d read so many of them.

Turns out I was TERRIBLE but I really enjoyed it. So I went to school to learn how to do it better and ended up with an internship at Marvel which really whipped me into shape on the whole “working on a deadline” thing.

Shortly after that internship, I started making my own little ashcans and pitching them around… Long story short… It worked! I’ve been lucky to have been working in the industry full time now for five years or so now. Having a blast!

MM: What is the most influential comic you have read (OR who are your influences)?

DC: I think, like a lot of people my age, Preacher was the first book for me where I was like “Whoa, you can DO THAT?” Preacher led me down a path to things like Sandman and Swamp Thing and all of that. I think my FAVORITE comic of all time is probably Alan Moore’s run on Miracleman. I think it’s so overlooked in the pantheon of greats.

MM: What are, in your opinion some of the more underrated recent releases from independent publishers?

DC: The Dreggs from Black Mask is a book that I think is really deserving of some more attention. Love that book!

MM: What is your workload like under the Image Comics model? How does it compare with your expectations?

DC: It’s pretty intense, especially when you’re doing two of them simultaneously. But it’s the work you dream of, you know? So it never feels like WORK. As someone who used to be a line cook and a construction worker, you will NEVER hear me complain about working on comics at my desk sitting in the air conditioning!

Ben Hastie: Can you tell us a bit about your latest series God Country?

DC: God Country is about an old man out in West Texas named Emmett Quinlan who is dying of Alzheimer’s. A tornado rips through his town and levels his home and in the rubble of that home, he finds a 12-foot indestructible enchanted talking sword named Valofax. While he’s holding on to that sword, his illness is cured. He knows who he is and he can recognize the faces of his family. Problem is, the true owners of that sword (20 foot tall cosmic Kirby Gods) would very much like it back…

MM: What was the inspiration behind the heavier subjects in God Country?

DC: Eh, well, it’s kind of personal, but the short version of it is; I went through a kind of profound life-threatening health event myself a few years back. When I came out the other end of it, I suddenly had a lot to say about life and death and illness.

Add in the fact that I’m a kid who grew up in Texas reading Jack Kirby Thor comics… And God Country is what comes out on the other end.

MM: God Country issue #2 reveals more fantastical elements but still keeps the story close to home on a personal level. How do you find balancing the heavy-hitting themes with the lighter, fantasy elements in the God Country universe?

DC: Well, those two things are one and the same to me. The book has a lot of moving pieces. A lot of giant folklore and Fourth World Kirby god-type stuff going on, but at its core, this is a story about a small family dealing with forces that are much bigger than them, and things that are just impossible to control.

The gods and the conflict surrounding the sword are really just metaphorical extensions of that core idea. Big things that can’t be controlled. Can’t be ignored. Only battled through. Only dealt with.

MM: Geoff Shaw (Artist: God Country) and yourself have been collaborating for a while, what makes the two of you such a great team?

DC: Well, Geoff and I are really good friends, and I think we share a really similar taste in what we want out of stories. We’re both really drawn to emotional beats, and earning them as much as possible. We share a sense of humor as well, and Geoff can sell the hell out of a joke.

I think at the end of the day Geoff and I share a common belief that stories are important and that they should MEAN something. We’re both very conscious of the reader. We always want to make sure the book is worth the money they spend on it because Geoff and I are both total comic dorks too!

MM: God Country has been very well received, what can you tell us about your new Aftershock series Babyteeth which is coming later this year? (I feel like it’s going to be a big year for Aftershock).

Babyteeth is about a sixteen-year-old girl named Sadie Ritter who gives birth to the Antichrist, and as hardcore as that might sound, it’s the sweetest, most loving book I’ve ever written. I had been writing about gruff and gritty no-nonsense men for so long, I think I just needed a break. Needed to write someone smiling! I think the fact that I have a baby in my life (My nephew Dylan) has obviously played a very large part in it as well.

BH: We’ve been blown away by the content coming out from Aftershock. How has your experience been of working with the team and specifically with Mike Marts as an editor?

DC: Well, that’s the other awesome thing about the book. This is not an exaggeration at all, but the book was conceived of, pitched, and sold within a span of about four days. It came to me all at once, kind of fully formed. And Mike and Lee at Aftershock kind of fell in love with it at the same breakneck speed that I had for it. So it’s all very new. And very, very exciting!

Sometimes when you pitch a book and it just takes FOREVER to get approved you can kind of lose your steam on it. It kind of saps the energy out of it, so when you finally get around to writing the thing itself you have to force yourself to get hyped again. With this one, I was able to just hit the ground running with no hassle at all!

Michael Francis: How do you compare and contrast the editorial styles between Aftershock, IMAGE, and Heavy Metal. Do they differ greatly?

DC: Every company is different. At the end of the day though those are all Creator Owned companies, so the editorial team is really just there to act as a sharpening stone for your blade. They just want to help you execute your idea in the absolute best way possible. It’s a very far cry from the kind of “Editorial nightmare interference” stories you hear about from some companies.

MF: Your work in comics has spanned over many different genres and your stories feel very cinematic, what inspires you to create in such a range of genres?

DC: I literally have no way of answering this hahaha! I don’t give it that much thought. I don’t really think about genres….I just kind of tell the stories I think sound cool.

MF: It looks like you’re keeping yourself busy with at least three ongoing series at the moment; Baby Teeth from Aftershock and God Country and Redneck at IMAGE. How do you juggle the demands of working on three different titles at the same time?

DC: Well, God Country is not an ongoing. It’s a six issue mini. But yeah, I’m actually writing five/six books right now. A few haven’t’ been announced. I’ve not ever really struggled with switching between them. To me, it’s like asking someone how you juggle keeping up with more than one friend. You have a few close friends and family and you know what they’re doing and you know what their personality is…

Stories for me, have always been the same thing. Redneck is a different person than God Country….Babyteeth is a different beast than Atomahawk. It’s never been a problem for me really. I also tend to heavily outline and take notes, so by the time I’m sitting in front of the computer ready to actually type I’m already there. I also make different playlists. Music is pretty good at switching a mindset over to a new thing.

MF You’ve got some great collaborators on all your books, all with very different styles and voices. Does this impact your approach to writing or scripting when you compare working with Garry Brown on Baby Teeth, Geoff Shaw on God Country and Ian Bederman on Atomahawk?

DC: Yeah, it’s all very different, but what changes is more person to person really. Like with Geoff I still write very tight but it’s all very conversational because I’ve just worked with him for so long. Whereas with an artist that I maybe haven’t worked with before I would be much more clinical and detailed.

MF: From the research I’ve done Ian works primarily as a tattoo artist. How did you first meet him and how did you come to work together on Atomahawk?

DC: Oh, Ian and I have been friends here in Austin for a long long time. He’s been my good friend and my tattoo artist for YEARS and it wasn’t until this past year or so that it dawned on us that maybe we should do a comic book together. Working with Ian is a blast because I just go over to his place and we both bust out sketchbooks and act like little kids playing pretend.

There’s actually never really a script for ATOMAHAWK, we just chat it up and we both draw outlines, he paints it and then I go back in and add balloons and captions. It’s so much fun.

BH: What advice would you give a young writer that would like to get into writing comic books?

DC: Don’t. I don’t need the competition! But seriously, I think the best advice if you want someone to actually read your work is to hire a dope artist to draw your script. Because NO ONE will ever read your script.

I promise. No one. Ever. Not ever. Get someone to DRAW that script? Now we’re talking!

And you can learn a lot from listening to the artist you hire. If he or she tells you something isn’t working? LISTEN. Also, find a comic you love and reverse engineer it.

Take a page from Waid and Samnee’s Daredevil and lay it out in front of you and write what you see like this:

Foggy: Matt no it is dangerous

Daredevil: But I must because justice

Do that for an entire issue. When you’re done, you’ll have a pretty basic idea of what the job entails.

Donny Cates’ God Country by Image Comics is out now at all good comic retailers, Babyteeth by Aftershock is coming out later this year so pester your local LCS to put aside a copy or two.