Prime is the Paragon of Hope City.

Hope City, the City of Tomorrow, a shining metropolis in silver and steel.

This is Prime’s story.  The story of who he is and how he came to be or at least part of it anyway.

In this first issue British writer Stu Perrins and Spanish artist Israel Huertas introduces us to the superheroic world of Hope City as the titular hero must thwart a bank heist by the evil Dokta Destruco.

Perrins has been writing and producing independent superhero comics for a few years now under the Clockwork Goat banner.  He uses this experience and knowledge of the genre to inject a clever sense of humour to the story including a several fun nods and winks to some of the trappings and tropes of the capes and capers game.  This is particular evident in the tease of Prime’s origin story which is introduced in the second half of this first issue.

It’s this creativity that’s able to elevate this debut issue of Prime beyond what could have otherwise been a reasonably predestrian Superman analogue into something more fun. 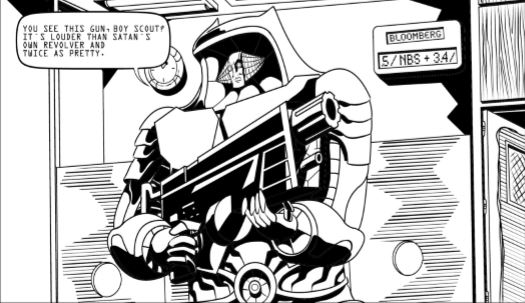 Huertas has collaborated with Perrins in the past on short stories or anthology books for the Clockwork Goat label and also done some work for this highly enjoyable Nova 619 fan comic but this is his first full length superhero series, to my knowledge anyway.  His bold and deceptively simple black and white line work is well suited to the uncomplicated tone of the story.

All this makes for a a strong first issue with a fun and engaging twist at the end.  My only real gripe is about the lettering in this book.  The kerning and punctuation of character’s word balloons and dialogue boxes is at times inconsistent.  This is most notable in Prime’s dialogue and can be a little jarring and off putting if like me you’re pedantic about this sort of thing. Still it’s far from a deal breaking and certainly not something that should dissuade you from picking up what is otherwise a few superhero story.

You can pick up digital copies of the first three issue of Prime right now from the Clockwork Goat store on Drive Thru Comics. The first issue is currently on sale for the bargain price of just 10 cents (!) and issues 2 and 3 are only a dollar each which gives you more than enough reason to snap all of these issues for less than the price of a standard Big 2 corporate superhero book.  Stu assures us that issue 4 will be available soon, you can follow him on Twitter for more updates.